Yes, it’s a hashtag. I created it because I wanted to talk and document my time on the bus since I take the number nine to and from work every day. Depending on the time of day I get to see kids, parents, workers, students, hipsters. You name it and I see it all on that ride from Fullerton to 21st street every day.

This was a different day, though. The day that this story takes place was a different day. I was on the bus, starving and tired and I sat in the middle of the bus while on the phone. When I hung up, I look over to see a man who didn’t smell to nice and so I leaned my head against the cold glass of the window and decided that through all the bumps and potholes, I was going to try to take a nap. I was on my way to my parents’ house and had farther to go.

I awoke to hear two women talking. The Ashland bus ride is always interesting and you never quite know that if the two Mexican women you see talking actually know each other. And I had no idea if they knew each other. But one woman sat down next to me, while the other was standing over her, a little younger, in the crowded bus. They spoke in Spanish, discussing (but kind of more complaining) about the cold, talking about the ride home and then some. The woman who was sitting next to me says that she had a doctor’s appointment at noon that day. Noon. And she was just going home from that now. Noon. It had to be a clinic, I thought. And so far from her home, too.

Me, the eavesdropper, kept listening. I was now sitting up right, instead of leaning over on the window. The woman standing up asked what she went to the doctor for and the older woman said, “Pues, todo” meaning “Well, everything.” She explained that she had diabetes and that her husband did, too. The woman standing up she was also diabetic. This was around 5:30. How do I know? I tweeted about it. Yes, ma’am, I tweeted this conversation.

@kikisbetes: Lady on the bus just said she’s had #diabetes for over 20 yrs and until now is controlling it. Her #a1c was at 11.

So that was the first tweet. The woman who said that was the one standing up, who was a bit younger than the woman sitting down, like I said. She has had diabetes for over 20 years and also had siblings who died from it. I always find a problem in the way people say, “They died from diabetes.” No one really DIES from diabetes. It’s the same as if you had said, “He died from AIDS.” You don’t die from the diseases, you die because of the complications that come with having them.

Anyway, she said that she had never controlled it until now and was taking insulin shots. Her A1c was at 11. By the way, that was the first time I had heard any person not in a doctor’s office, not a doctor or a nurse, say out loud “A1c.” It was kind of weird, but at the same time, awesome because this person was taking the time to educate herself. She continued to talk about how she was taking over 60 units of insulin to keep her controlled. She was telling the older person that it was important to take care of herself because then  it would start to affect her kidneys, her eyes. I thought to myself, ‘Either someone got to her or she found a good doctor.’

The woman who was standing got off at 18th and Ashland. During that time, I had tweeted some more.

When the woman standing up left, I thought, ‘How do I say something to this woman? What do I say?’ So I had this genius idea. I pulled out my glucose meter and I checked myself. I was feeling kind of weird any way and she looks over and says, “Mira! Tu ta mbien tienes diabetes! Y tan joven!” Look! You have diabetes too! And you’re so young. I started explaining my situation to her. I was diagnosed at 7, I have type 1 not type 2 and I’ve learned to live with it.

She understood. She started telling me about her husband who is going blind because he didn’t control his diabetes. I told her about my grandma who, by taking care of herself, put her diabetes into remission. I told her about my cousin, answered her questions as to how we got it so young and gave her tips on what to eat to improve her diet. “It’s that it’s just so hard,” she said to me. I told her, you must have the will. She understood exactly what she needed to do but also understood her own psychology behind it. “Es que la gente come y no piensa. Luego cuando pasa algo asi, no saben como cambiar para cuidarse,” she said. It’s that people just eat without thinking. Then something like this happens and no one knows what to do to take care of themselves. 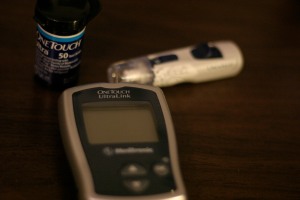 She explained to me that she started feeling shaky at 100. I told her to hang on and deal with the uncomfortable feelings. She said that her vision changed and I told her to keep her blood sugars down. I asked her if she had kids and she said, of course, going on to tell me about her children and grandchildren. I found out she lived on the far south side and didn’t want to bother her daughter, who has a newborn and another child, to take her to the clinic. “Alone, I go at a calmer pace and I don’t mind.”

I told her to tell her kids to look things up for her online. There are so many resources for diabetes, especially since so many people have it now. The CDC just released information saying that three million more people have diabetes now since 2008 and the amount of pre-diabetics has risen 22 million people. Now there are 79 million pre-diabetics. That’s insane.

When I was talking to this woman, I completely sat past my stop for about 15 extra blocks. I tried to tell her what to do to improve herself, obviously nothing a doctor could tell her. The amazing thing is, for those 26+ million Americans who are diabetic, you’re telling me that all of them have insurance? All of them are taking care of themselves? Impossible.

There are people like this woman who don’t know what to do and it’s not because they don’t care to know, it’s because they’re scared and don’t know where to turn. And the funny thing is that I thought to myself, “Come on, you’re Mexican. Eat like you did in Mexico.” Then I stopped myself and thought, well, that’s probably what she has been doing and that’s exactly what’s hurting her.