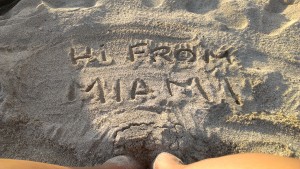 It’s been a while since I’ve been here on my very own site with my very own insights and blogs. What a blessing. Yesterday I decided that I was going to revive the blog and it was a long time coming. Well, actually about a week and a half. I went down to Miami for the Hispanicize conference and met a ton of Latinos all doing the same thing; making it happen with their own insight, brands and storytelling.

If you don’t already know, I’m a founding member of Pícaro Media, a content creation company for the Latino market. We’re pretty cool, if I may say so myself. Anyway, we went down to South Beach and I knew I was going to find one fellow diabetes blogger. As I sat in her panel discussion, I asked a question and was approached by several different people about having diabetes. I realized that since I have become a representative of myself and what I do, I would have to revive this blog. It’s a good thing, too. I have a lot to talk about.

I made it to 28 everyone! I know, plenty of you are saying that that’s so young, but it feels good to be another year older with more wisdom under my belt. Wisdom, friends, insights, experiences, the whole thing feels delectable.

So here come the diabetes stories I have. On my way down to Miami, I was harassed by the TSA again.  Not harassed, since I’m used to it, but instead of putting me through the metal detector, when I refuse the body scanner they automatically have to pat me down. That’s slightly ridiculous if you ask me. It happened going to and coming from and is a pain in the butt. There has to be a standardized way of handling us people with diabetes, I tell you. Because it’s becoming very unfair. Like I said before, I don’t ask for privacy because I want people to see what I go through so they learn and know how discriminatory it is.

Secondly, I was listening to Dr. Oz today as I was getting ready to leave my apartment and I heard him say, “This is what happens to diabetics.” It irked me. To have a “doctor” say that kind of sucked. This little pet peeve about words, I think, makes more sense coming from me as a journalist and a grammar Nazi. However, on the other hand, these words have an impact on the people of whom you are speaking. It’s like calling someone “disabled.” We are not defined by these words. We are merely subject to the limitations these issues have on our lives, but it doesn’t stop us from living. Properly, it is said “People with diabetes,” and “People with a disability.” Done and done.

I think that’s it for now. I just wanted to share a bit so that I can tell people I’m bringing this back to live for my 28th year of life. I feel good about it. It’s moving forward and so am I.